The Lost World of Old Europe

We certainly couldn’t miss this and managed to visit Oxford’s Ashmolean Museum on the last weekend of the exhibition, a trip well worth making.

“We” being Rachael Clyne, author of many great poems and articles in Goddess Pages and Geraldine Charles, a joint editor of the magazine.

I was disappointed, but not surprised, to find that photography was not allowed, but the multi-talented Rachael borrowed my pen and immediately started sketching on whatever paper we could find and once home she turned those sketches into some excellent drawings, as you will see below, complete with her impressions

While there, we bumped almost literally into Paul and Sylvia Williment – Paul is our printer and I lost no time in asking him to write down his impressions, too.  The result is this review of the exhibition.

I loved the exhibition and could happily have spent days in there.  The most disappointing aspect, I thought, was the complete lack of mention of the work of Marija Gimbutas, who did so much for our understanding of the amazing figurines and other artwork still being found in Old Europe, and elsewhere.

Paul’s impressions make a good introduction to the exhibition:

“I was thrilled to discover that a major exhibition of archaeological finds from the settlements of Old Europe was on display at the Ashmolean. The exhibition brought together more than 250 objects from over 20 museums,  displaying the exceptional creativity and spirituality of Neolithic peoples over a 1,500 year period from 5000 to 3500 BCE.

The exhibition was beautifully and spaciously laid out in two rooms, one displaying the Goddess figurines and another beautifully decorated pottery vessels and jewellery.

The Goddess figurines are clearly the stars of the exhibition. I returned again and again to the Poduri-Dealul Ghindaru figurines, very suitably described as 'The Council of the Goddesses. Each Goddess figurine seated, beautifully decorated and crafted with exaggerated 'child bearing hips'. They had been arranged in two concentric inward facing circles depicting their unity and equality and forming a compelling whole.

Many of the other figurines reminded me of gingerbread women. Flat figures intended to be laid down or lovingly held in the hand. Each complete in Herself. Some were displayed in pottery containers with incised triangular patterns and open horned entrances. A domestic shrine or a home for the living or the dead? Certainly a reminder of a time when the home was the spiritual centre and a business opportunity for a modern potter. I would just love one of these shrines on my hearth.

Two distinctive figures were of a seated woman and a man. The male figure had been named 'The Thinker' because of its similarity to the Rodin sculpture. These figures were found in a funerary deposit suggesting they might be figures of people in mourning. As I gazed on their very special beauty and the look on their faces it struck me that they might be on a trance journey between the worlds of the living and the spirits.

The pottery and jewellery on display spoke of a culture settled and at ease with itself. A people with time available for the finer things of life. A love of beauty and  decoration. A reminder of good times before the rise of the great empires which were to overwhelm Europe.”

Rachael’s drawings are below – she says that the descriptions may be a bit scrappy here and there, but we didn’t think of reproducing the drawings for your enjoyment until a few days later …. the names aren’t always the official exhibition names, either! 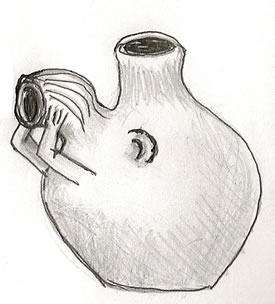 Screaming pot – terracotta, about 9-10 inches in height.  You could easily confuse this piece with Edvard Munch's "The Scream". It's a disturbing piece but incredibly expressive and contemporary considering its age.

I was drawn to this striking image from the other side of the room. Sadly, the amazing ram head has been added, taking references from smaller, similar objects found nearby. I love the flattened flask shape, which is made in a deep chocolate clay, with the ropey maze patterns applied in relief. It is thought it could represent a temple building,  with the entrance being centre bottom. The reverse side is similarly covered in  oblong maze patterns. 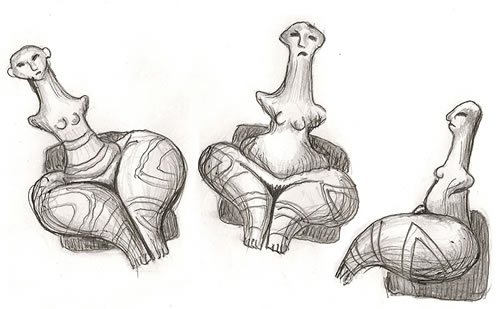 The Council of Goddesses was found as a circle of fifteen seated figures ranging between 1 and 2 inches high.  They are pale terracotta in colour and the whole piece is most intriguing. The smaller figures seem to be younger or more junior participants and form a partial inner circle. The archetypal chevron markings on their hips an legs accentuate the vulva triangle, whilst the upper body, including the breasts, are much more vestigial. A rather grumpy looking lot in my opinion.

Little Girl carrying water (fired clay approx 4000bc? - Rumania)
This must be the top of what was originally a much larger pot with the little girl's dress making up its body. The clay is mid terracotta in colour and material.

I found this piece utterly charming, contemporary and capturing the all spontaneity and joy of the little girl carrying water on her head. She could be a cartoon straight out of the “Beano”, with her snub nose and cheeky, toothy grin. However,  the artistry with which her eyes are captured, purely by the way the shadow falls on the surface is amazing. All in all, a delight. 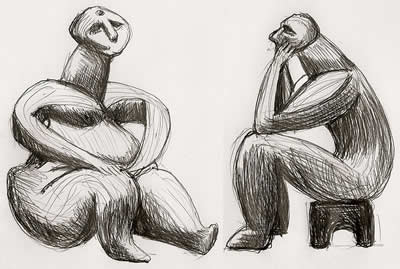 The figures are about 3-4 inches high and although made in fired clay they are black in colour with a burnished finish.  They look as if they could have been carved from soapstone.

If you didn't know what this was you'd think it was a piece of Henry Moore sculpture with their elongated necks and massive forms. The couple are so striking in their expression and presence.  I showed the image to a friend, asking “Who do you think made this?”  “Henry Moore”, she replied, without hesitation.

Only a few inches high, yet exquisitely moulded; it was through drawing them that I truly appreciated the artist's skill. S/he has translated their forms into geometric planes causing the light and shade to accentuate the shape of their bodies. Her form is reminiscent of Maltese and Anatolian goddess figures and to me is more iconic.

The male figure, on the other hand, seems more personal; the uncanny realism of his posture and the way the bottom of his back dips over the stool (a type of rural stool still commonly found today) quite took my breath away. The two figures have been interpreted as connected with mourning and the sadness in their eyes - achieved by the angle of the hollows and the way the light falls on them, certainly conveys their grief.

Several people remarked that they were the stars of the show, and I think this is because of the relationship between them that touched us so deeply.

Spiral goddess  - she is a yellow terracotta in colour.
This iconic figure, about 8-10" high, is made of yellow terracotta. Her image is firmly imprinted on our Goddess-loving minds. Depicted from her delicious, walnut whip derriere, she is a feast of maze and chevron patterns and clearly made to be displayed seated. Her front is less spectacular, but lovely all the same and with very small breasts, this is true of  all the figurines in the exhibition which place greater emphasis on hips and belly.

© August/September 2010
All words and images remain the copyright of their creators.

Thanks to reader Linda Stubbs for letting us know that the exhibition is currently on view at the Museum of Cycladic Art in Athens - the show closes on 10th January 2011.  Well worth a visit if you are anywhere near the area!  There is also a fully illustrated catalogue that accompanies the show.