In the beginning was the first Shaman who drummed all things into being – even Time itself. She struck Her drum and shook Her rattle and the sound it made echoed in thunderous circles like a lone heart beating throughout the cold dark vast emptiness of space.

By and by, Moon’s face shone reflected upon the surface of Her drum. Moon smiled at Shaman and Her smile lit up the darkness of the eternal night. As She shook Her rattle, jewel-like seeds rose up from it and filled the night sky with countless tiny lights which surrounded Moon, and these became the stars and constellations. Still Shaman was very cold, so She began to beat harder and faster upon the skin of Her drum where now could be seen all of the waters of the oceans and rivers. The force of Her beating upon them created the great waves, pounding surf, and mighty currents. And this time the seeds which fell from the rattle scattered and swirled into the depths below and became every creature that swims and lives beneath the sea.

And it came to pass that Sun’s face also made an appearance on the surface of the drum and smiled at Shaman as had the moon. This made Her very happy, and as She beat out Her joy excitedly upon Her drum, many sparks flew from the face of the sun and ignited a fire at Her feet. And in this way She was finally warmed.

The heat from this fire began to dry up some of the oceans, and before long the deserts, mountains, the forests and the beaches took shape. The seeds which now fell from Her rattle fell onto the land and every living creature that walks, crawls, lights and grows upon the land including humans came into being in this way.

Now it was the old Shaman’s turn to smile. She spoke to the humans and Her voice became the four winds so that all might hear her words:

“Beat upon your drums and shake your rattles and sing your songs in this way that I have taught you, so that you might dance and seek your visions, summon your spirits, honor your ancestors, heal your sick and celebrate the life which I have given to you, and fill up the world with your own creations as I have done.” 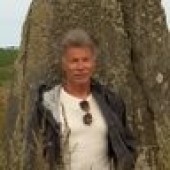 A graduate of Southern Oregon University with a degree in Fine and Performing Arts, Jim Malachi resides in the Pacific Northwest where he earns his living as an artist, writer, and musician. He is a published novelist as well as a fragmentary writer whose work has also appeared in FragLit Magazine, an online publication devoted to the art of fragmentary writing.