All this pitting of sex against sex, of quality against quality; all this claiming of superiority and imputing of inferiority belong to the private-school stage of human existence where there are sides, and it is necessary for one side to beat another side. (Virginia Woolf, A Room of One's Own, 1929) 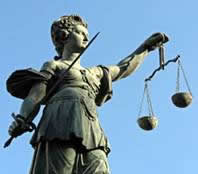 “Yeah, but what about balance?” I’ve been asked that question many times, sometimes even stopped in the street or interrupted in the middle of a talk. The questioner no longer needs to explain what he – or occasionally she – means: a belief that it is wrong to work only with goddess, “excluding” the god.  Particularly since the Goddess Temple opened in Glastonbury I - and others - have been accused of riding roughshod over the concept of balance as A Good Thing, apparently involving nothing more strenuous than placing a token representation of any male deity in the Goddess Temple. I’d like to reach for my sword, symbol of air, of clarity and truth, and look at this idea of balance in some detail.

A good definition of balance would be “a state of equilibrium”, and of course equilibrium, as any physicist will tell you, does not necessarily involve an equality of forces.  In any case this can only be achieved if nothing else is changing, which is never the case in human societies.  Yet, if you ask the questioner what is meant by balance, the answer normally involves equality of some kind; there is usually also a mumble of “being as bad as before” which I take to mean that the lack of a god, a male figure, in the temple suggests a matriarchal turn of mind, that the god is being ignored in precisely the same way that goddess has been overlooked for the past few thousand years.  Of course, we haven’t even considered reclassifying male deities as demons (see any Old Testament for evidence of this done unto goddess)!

It should hardly need to be pointed out that a Goddess Temple exists for a reason – in part to redress, in a very small way, thousands of years of complete imbalance, by providing a place where our love of goddess can freely be expressed and celebrated.  Why have a token male deity in such a place?  Surely that would simply be an afterthought, even an insult, in the same way that a concept of deity as female is a postscript in the sort of Christian churches who have, very late in the day, introduced phrases such as Our Father/Mother (or even Our Parent, which always makes me giggle).  Altering the Lord’s Prayer does nothing to reassure me of the good will of the Church towards feminine spirituality.

Maybe I should reach for my (perfectly balanced) scales and weigh some of these assumptions.  On the right hand I will put the x thousand years of patriarchy that affect my every thought in ways I cannot begin to enumerate, particularly as many of them probably aren’t even conscious. On the left – how shall I symbolize the deliberate decision to have no representation of the god, the male principle, in a small, one-roomed Goddess temple in an English country town?  Perhaps a feather would do nicely.  After all, even in this town there are at least six conventional Christian churches and all manner of other centres of worship, none of which are dedicated to a female deity or appear clearly to offer a female-centred spirituality.  What imaginary weight must we place alongside our feather to crash down the scales firmly in favour of goddess in our questioners’ imaginations; so hard that patriarchy and its ills fly into the air in disarray?

This imaginary left-hand weight, then, is nothing but fear - of a matriarchy which is pictured, as in some 1950s comic strip, as patriarchy in reverse.  Will it “all go too far”?  Will women start behaving like men?

Perhaps I need a mirror as well as the scales, to try to see patriarchy through the looking glass. Would our much-feared matriarchy have sacred texts, scriptures, myths written with men as the original villains?  Adam, first to bite into the forbidden fruit?  Zeus, flung from heaven as the rapist he clearly was?  Or in lieu of Pandora, some inquisitive man opening a box from which fly the horrors of this world – the plagues of petroleum, the desolation of a Manhattan Project, the twin terrors of war and starvation?

Man destroyed the environment.  Man made war.  Man made weapons of mass destruction.  This feels unfair to me as I write it, even though I have learned, over many hurting decades, to reverse the linguistic spectacles and for man read humankind.  The irony is, of course, that man decided that the word for his sex would stand in for all humanity.  So in fact I can say these things with complete justice, and, but for the italics, scarcely anyone would notice.  Would our imaginary matriarchy redress by the invention of new languages the inequity of a thousand generations of women with no names except those denoting ownership?  Of a threadbare tongue, devoid of words for goddess except for those that mean “a female god”.  Goddess. Diosa. Déesse. Godin. Göttin. Dea … 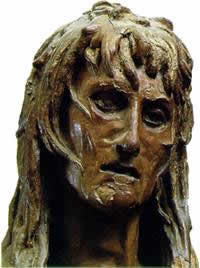 Perhaps, in the minds of our fearful questioners, women would one day meet in solemn council to debate whether men have souls – and having done so also realise that of course to control their behaviour we must give men their own saints, holy men to emulate.  Now, the Virgin Mary, a mother who remains a lifelong virgin and never - by all that is holy! - becomes a wise crone, is kind of a hard act to follow.  But we’ll think of something.  Or her other half – the Magdalene who repents lifelong, whose tears wash the feet of god – maybe repentance would be a good thing to encourage? Repentance for the state of the world, for weapons made and deployed, for hunger tolerated and poverty encouraged?

Perhaps, also, in our putative future matriarchy, scientists would study men, find them lacking – after all, they would say, men are made only for one purpose and so are necessarily the weaker vessels.  Perhaps we should make laws to keep them safely in the proper sphere, out of harm’s way?  But all for their own good, of course.  And those men who fought such strictures – well, they’d be unnatural.  Wouldn’t they?

Of course, we couldn’t permanently keep men in their proper sphere so easily without help.  Perhaps we could get them to police one another.  Set standards of behaviour for “good” and “bad” men; encourage them to mould their bodies to please us, to wear uncomfortable, badly-made clothes, to bind their feet or testicles – or worse.  To diet until their strength is gone. Keep them so busy being acceptable they wouldn’t have time or energy to revolt.  School them with our daughters?  Perhaps, but not for a few generations, just long enough until they accepted they couldn’t really make the grade.

And of course, we’ll smile, one day, at their efforts to emulate us, but carefully co-opt their leaders into positions of power, to prevent insurrection.  “Look”, we’ll say, “there are plenty of men in positions of power!” We’ll chide them for all sorts of things – for failing to understand their unique and sacred role in the world (in their proper sphere, of course), for a lack of understanding of how the world really works.  For irrationality and idealism in believing that another way is possible, that equality could be won.  For in fact, we’ll tell them, they already have equality.

It isn’t my intention to argue that a matriarchy isn’t what we’re trying to achieve – that is, or should be, obvious.  What I do find disturbing is that the tactics used to keep women in their “proper sphere”, right up to the present day, are the very same as those called upon to argue for “balance”.  Some of this we’ve seen through the looking glass … a usually unspoken belief that we did indeed cause many of the world’s problems, that “original sin” is down to us.  That our biology is, indeed, our destiny and that we ignore that certainty at our peril.  For wrecking paradise on earth by taking and biting into the fruit of knowledge (thus bringing about the growth of humankind into its full stature?).  For the offence of owning an equal share of sexuality, shame for which is inculcated into every woman at a very early age.

To assist us in carrying out more than our fair share of child-rearing and domestic work, many, if not most, women have an over-developed sense of duty, of fair play and sharing – so why not use this to get us to feel guilty at our audacity in creating one small goddess temple, unsupervised by any man, any priest of any god? Surely we should be repenting our sins ….. and of course the Magdalene figure is still being offered to us as a role model, although in the new, improved version we are now told that as modern Magdalenes we can “marry” the god and bear his child.  I’ll pass, thanks.

Balance sounds so reasonable, doesn’t it?  It really indicates a preference for the status quo – for the loss of that is what so many fear.  So I won’t blow away the feather just yet, it is precious to me and many others, those who are finding the courage and feeling our way towards supporting one another - women and men - in building and defending our goddess temples, not least the ones in our hearts.

I need hardly add that these are my personal opinions, and do not necessarily reflect those of the Glastonbury Goddess Temple or of the women and men involved in it.